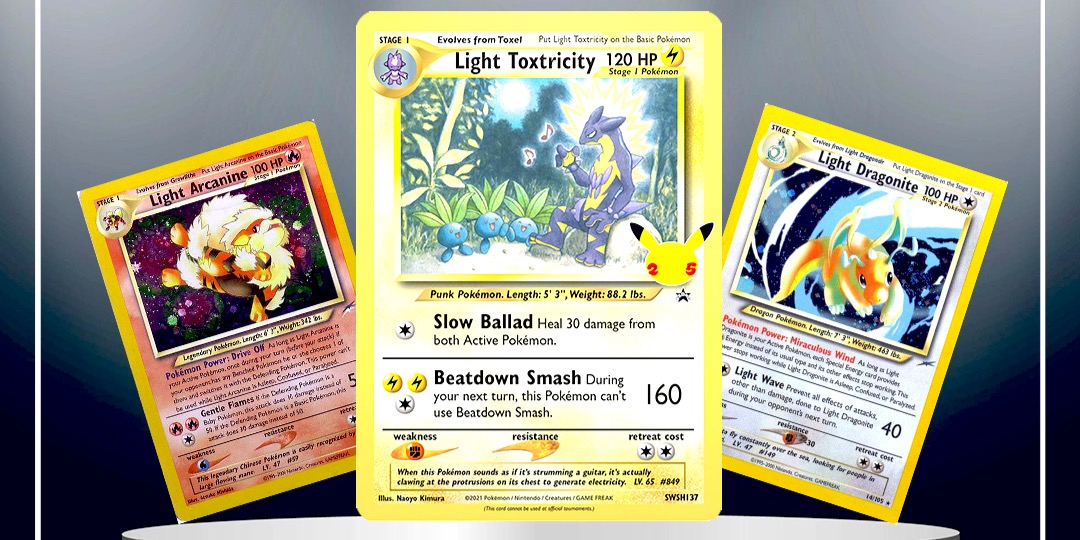 The last article was about the history of Dark Pokemon, today we're going to take a quick look at the Light Pokemon cards!

The only appearance of Light Pokémon is in the Neo Destiny expansion released in February 2002 (English) and June 2002 (French). As the title of the expansion suggests, it revolves around the potential path or "destiny" that a Pokemon can follow depending on how it is raised by its Trainer. Light Pokemon are opposed to Dark Pokemon, but where Dark Pokemon have continued to exist through Team Rocket Pokemon, Light Pokemon have only been released once in Neo Destiny. Light Pokemon have a white and gold illustration window, evolution box and Pokédex box, as opposed to the usual gold. In many cases, the artwork depicts a Pokémon seemingly content with itself or in a serene environment.

There are a total of 21 Light Pokemon cards released and the last one is none other than a Light Toxtricity promo. On the Celebrations set side even unfortunately no Light Pokemon cards have been reprinted. A rather surprising choice considering that Dark Gyarados has been reprinted. Moreover, we think that the choice of the Pokemon for the promo is questionable. Of course, the illustration of the Toxtricity is well done in the sense that it fits well with the atmosphere of the Pokemon Light cards, but a better Pokemon could have been chosen to represent them. We could have seen a Dark Eternatus and use Sylveon for the Light Pokemon card and use it as a reminder of the evolutions of Light Eevee.

The history of Light Pokemon was very short but nothing tells us that one day the concept will see the light again adapted to today's Pokemon and cards. Next week we will cover the history of Trainer Pokemon and conversely, there will be material on this type of card.

Thanks for reading and we'll see you next week!