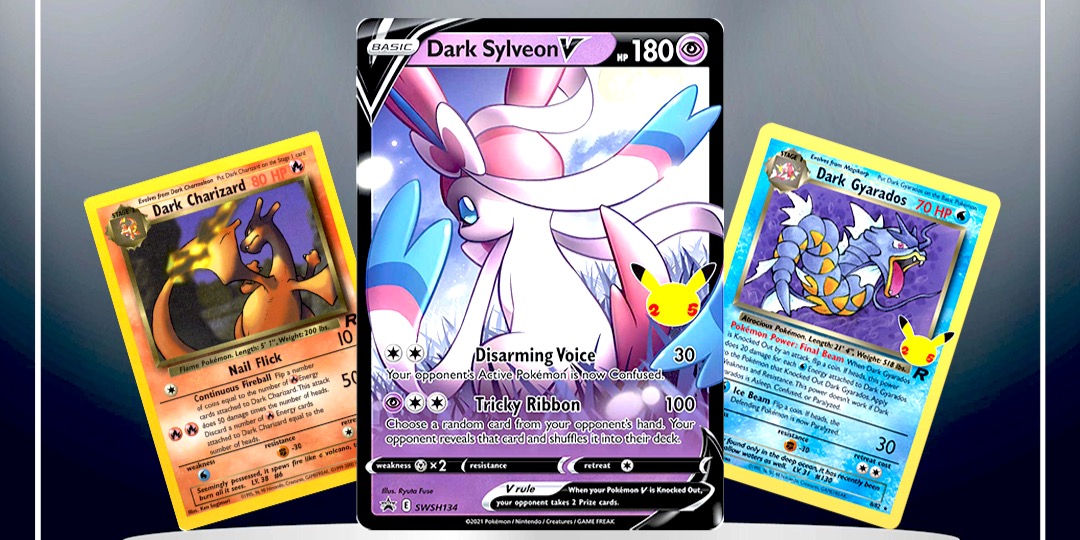 Today we're going to do a quick light on Dark Pokémon cards!

In April 2000 (in English) and March 2011 (in French) the first set introducing the Dark Pokémon cards, Team Rocket, was released. The first appearance of Dark Pokémon was in the Team Rocket set, in which all evolved Pokémon are Dark Pokémon. This is because Team Rocket is a corrupt organization and the Pokémon it trains also become corrupt.

As far as the design of the cards is concerned, the Dark Pokémon have a character window, an evolution box and a brown/black Pokédex box, as opposed to the usual golden cards. Today there have been 120 different Dark Pokémon cards released for 96 Pokémon. The Dark Pokémon theme continued in the following sets, Gym Heroes and Gym Challenge with the appearance of Team Rocket Pokémon, similar in many ways to the Dark Pokémon of the previous set however the "Dark" designation was not used. It was not until about a year later that the Dark Pokémon resurfaced. They were featured in the Neo Destiny set, which, as the title suggests, is a set that focuses on the "destiny" that a Pokémon can follow depending on how it is raised by its trainer. This series also illustrated the difference between Pokémon with "Dark" in their name and Pokémon with "Dark" or "Darkness" in their type, with Dark Houndoom released as a Fire Pokémon. After that, the Dark Pokémon were forgotten again until EX Team Rocket Return, which paid them a final tribute in 2004. If we had to choose only one Dark Pokémon, our choice would probably be Dark Dragonite from EX Team Rocket Return. We especially like the artwork on the card.

Celebrations pays homage to Dark Pokémon cards via the re-release of Dark Gyarados. This choice is probably symbolic because Dark Gyarados was the pre-release promo card for the Team Rocket set release. We think that Dark Charizard could have been reprint but since the base set version already had a place in the set we understand why the Dark version is not there. In the same way Celebration also gave birth to a new Dark Pokémon: Dark Sylveon V. It is possible if you still find sets to get your hands on this card along with two Battle Style boosters and four Celebrations boosters!

Thanks for reading and we'll see you next week!