What is Pokemon? Special episode

When we talk about Shiny Pokémon, we can't help but think of the Grail they represent in the video game. When they were created in Pokémon Gold and Silver, they only had a one in 8192 chance of appearing and owning one, apart from Red Gyarados, was a huge achievement.

Concerning the Trading Card Game, we're going to focus on the Shiners in the Wizards sets through EX Block, as these expansions gave us the most famous cards representing shinies.

This type of card saw its first iteration in the Neo Revelation expansion, with the release of Magikarp and Gyarados Shinies as secret rares, the first after Team Rocket's famous Dark Raichu. This rarity serves as a reminder of the exceptional nature of these cards, which represent the ultimate goal of any collector. 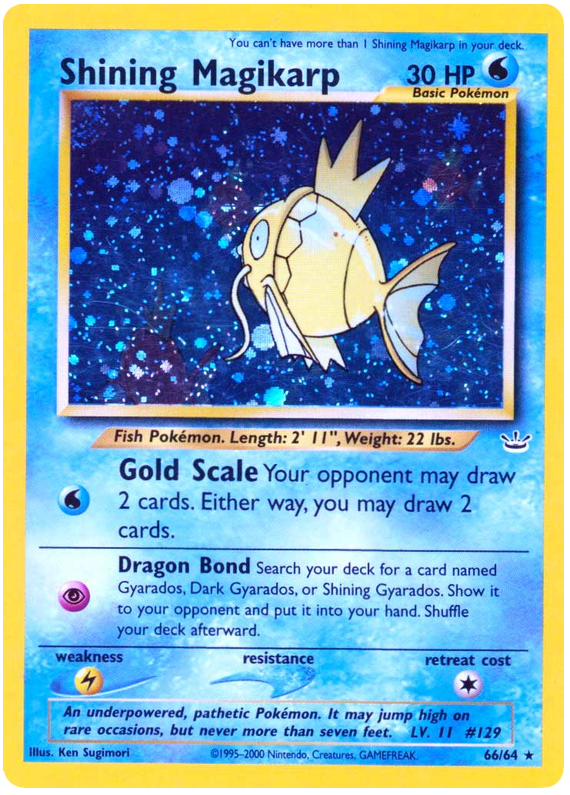 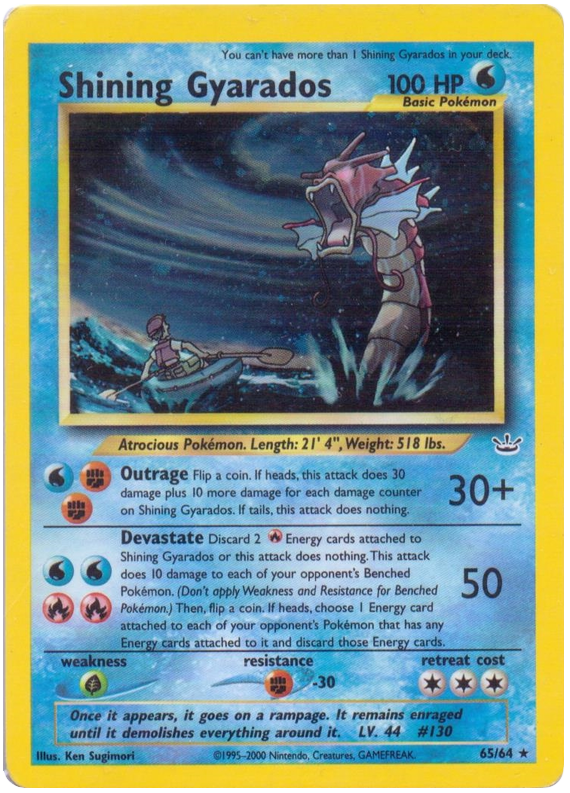 The following Shining ones will be published in the next set, Neo Destiny in 2002, and will be this time in the number of 8, being numbered 106 to 113 on the 105 cards of the classic list. It's within this Pokémon panel that one of the most sought-after cards still appears today: Shining Charizard, and it's also the first time that Pokémon cards will be printed with a unique holo pattern that allows to differentiate an ultra-rare card from a "simple" holo. 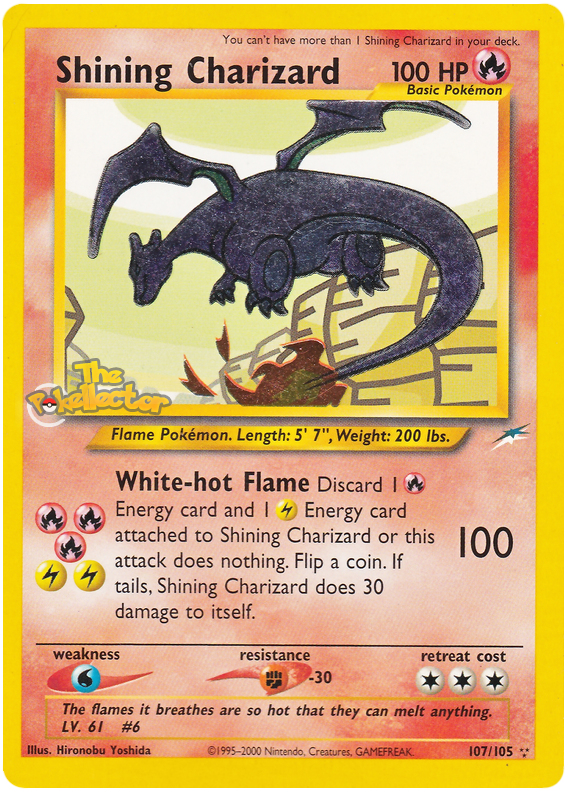 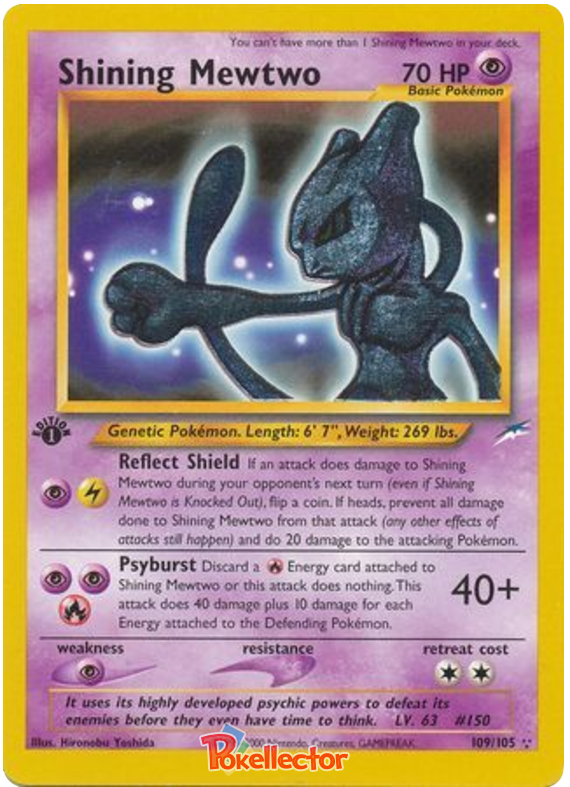 I should also mention that in Japan, for the release of Neo Destiny, an exclusive shiny version of a popular Pokémon was distributed with the CoroCoro Magazine; it is Shining Mew, which will unfortunately never be distributed outside the Land of the Rising Sun.

It would take until 2005 to see new Shiny Pokémon appear in the EX block of the TCG with the EX Deoxys expansion. And this expansion is outstanding in many ways, but what interests us the most is the printing of the first so-called Gold Star Pokémon, always secret cards, with a first trio of legendary Pokémon, by their status and design: Latias, Latios and Rayquaza, the most sought-after Gold Star today, and considered by many collectors as the most beautiful card in the history of the game. Masakazu Fukuda is the artist that will draw all the printed Gold Stars, and this particular Rayquaza artwork will make him a legend in the CGC. 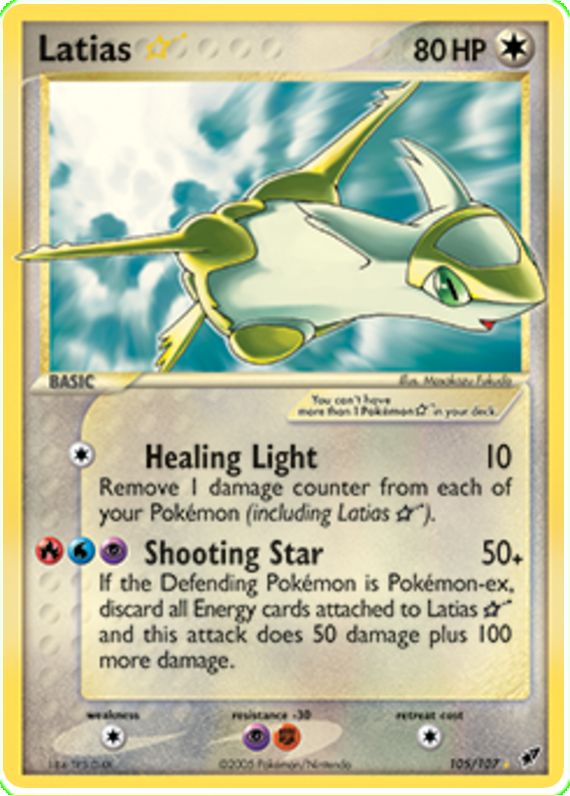 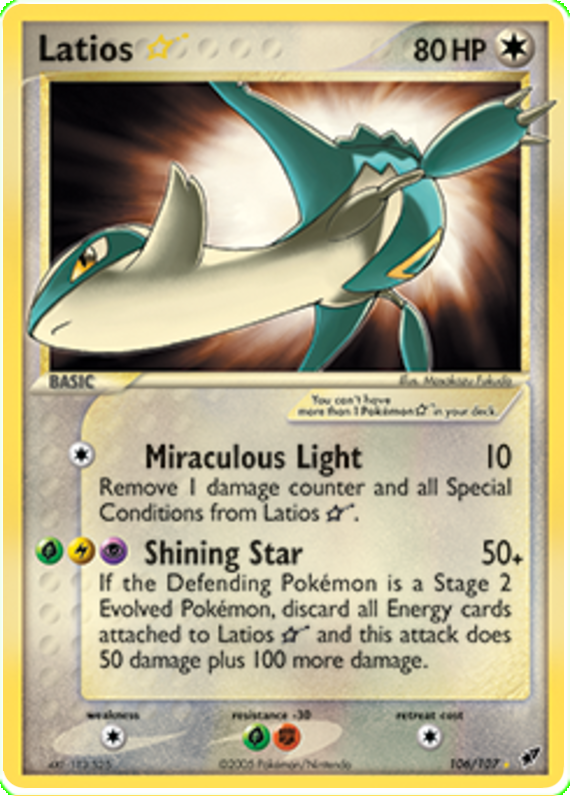 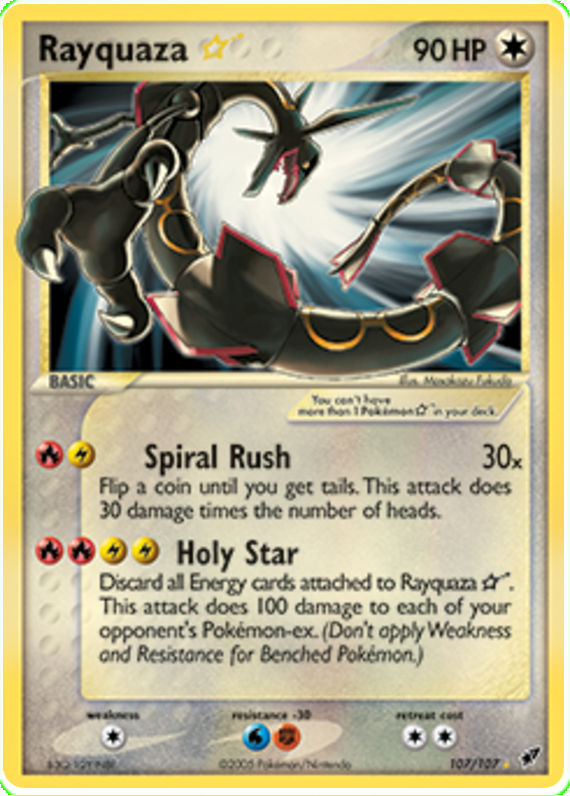 The next Shinys to appear are the trio of dogs (cats?) from the second generation, namely Entei, Raikou and Suicune, which will get its most beautiful illustration, once again under Fukuda's hand in the EX Hidden Forces expansion. It should be noted that in English these cards are relatively affordable, even in their graded version, as a huge stock of this trio had resurfaced a few years ago in the United States, more than 5000 cards in total, which created an overrepresentation of the English version of the three cards and a drop in their value in English, compared to the other popular Stars. 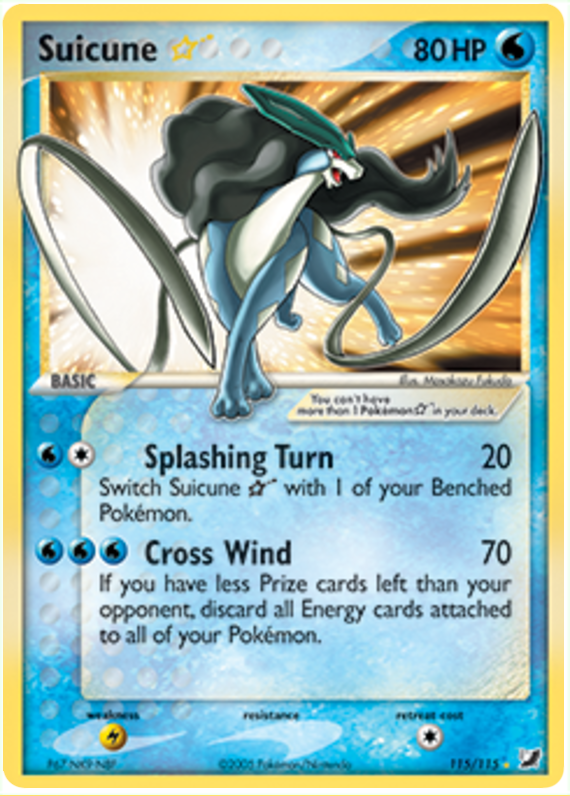 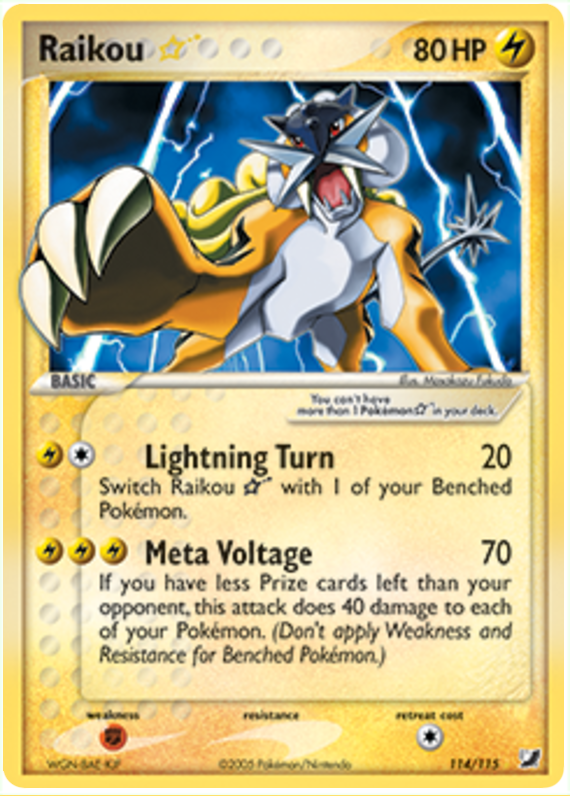 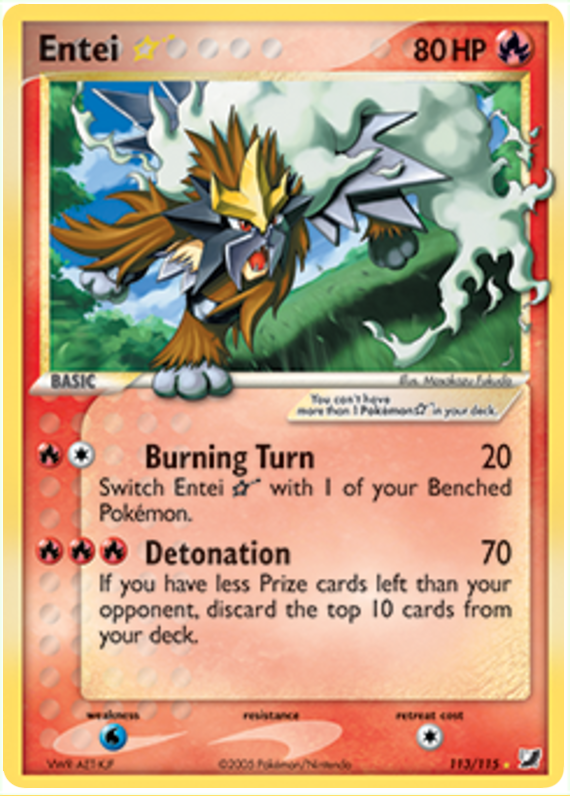 In 2005 in the US, the EX Species Delta set was released, taking place in a TCG exclusive region: Holon. In this region, electromagnetic towers provide energy to its inhabitants, but the radiation produced by these towers transforms the DNA of the Pokémon and creates a new species of Pokémon, the Delta (δ) whose types change. It is therefore not uncommon to come across a plant-type Dragonite or a fire-type Salamence in the sky. For the record, all of the Pokémon δ artwork depicts them near Holon Towers, which makes this expansion, and the ones that will take place in this region, exceptional from a storytelling perspective. Most importantly, this set will see three shiny new Pokémon join the already extensive list of lucky ones: Groudon, Kyogre and Metagross, three iconic pokémon from the Hoenn region. Metagross will be graced by Fukuda with one of his most beautiful illustrations... 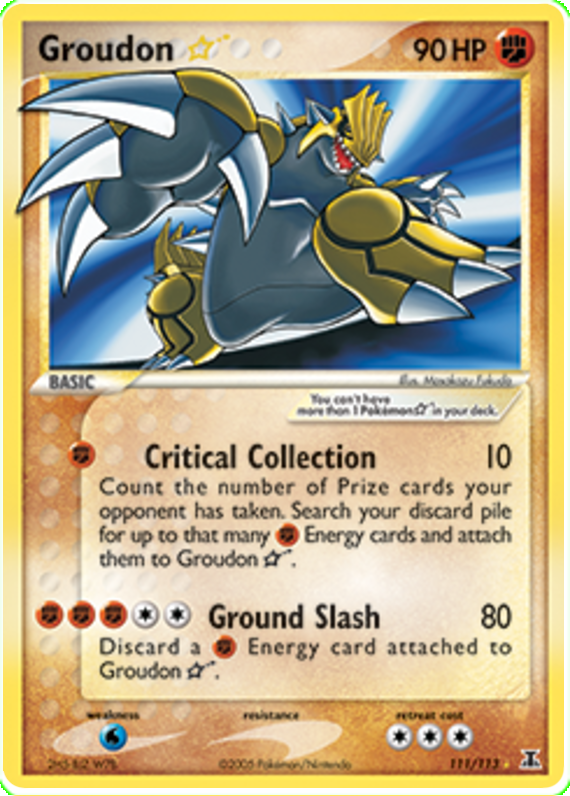 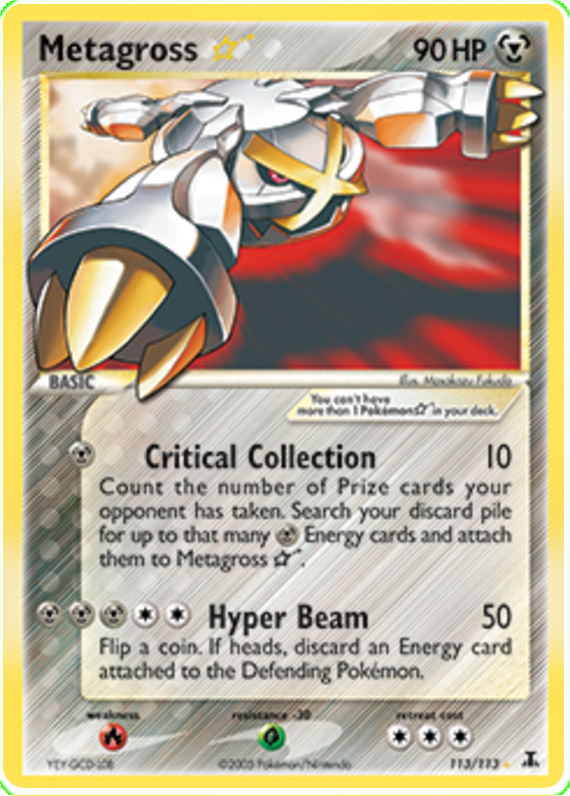 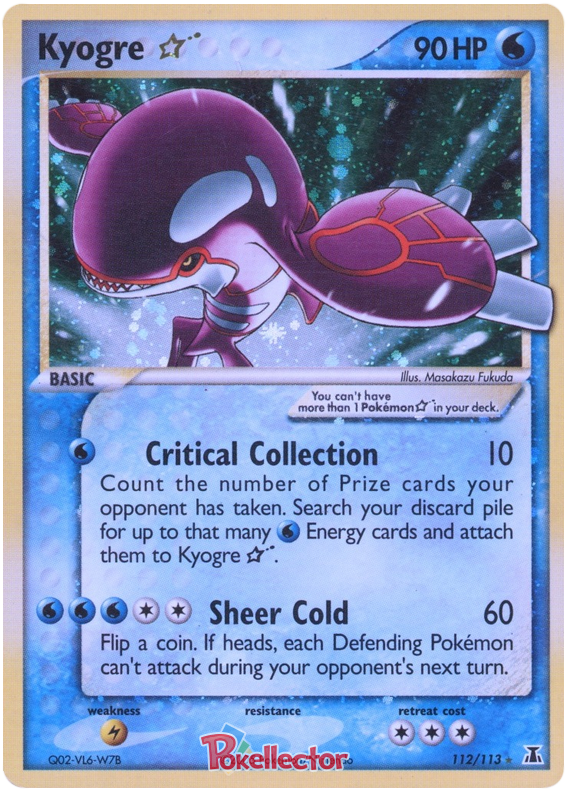 Until the end of the EX Block and the EX Power Keepers expansion in 2007, 13 new Gold Stars will be added to the list of those already released, bringing the total to 22. Among them will be a card that is still very popular today, as it represents one of the icons of the game: Charizard δ Gold Star, in the EX Dragon Island expansion, still one of the most expensive cards in post-Wizards sets.

It's also worth noting that card releases featuring Shiny Pokémon have intensified in recent years with series like Hidden Fates or Shining Fates, and hundreds of new, often anecdotal Pokémon iterations are now printed (Polteageist, I see you). Perhaps this generation of shiny, easy-to-access cards will be the subject of a future article...